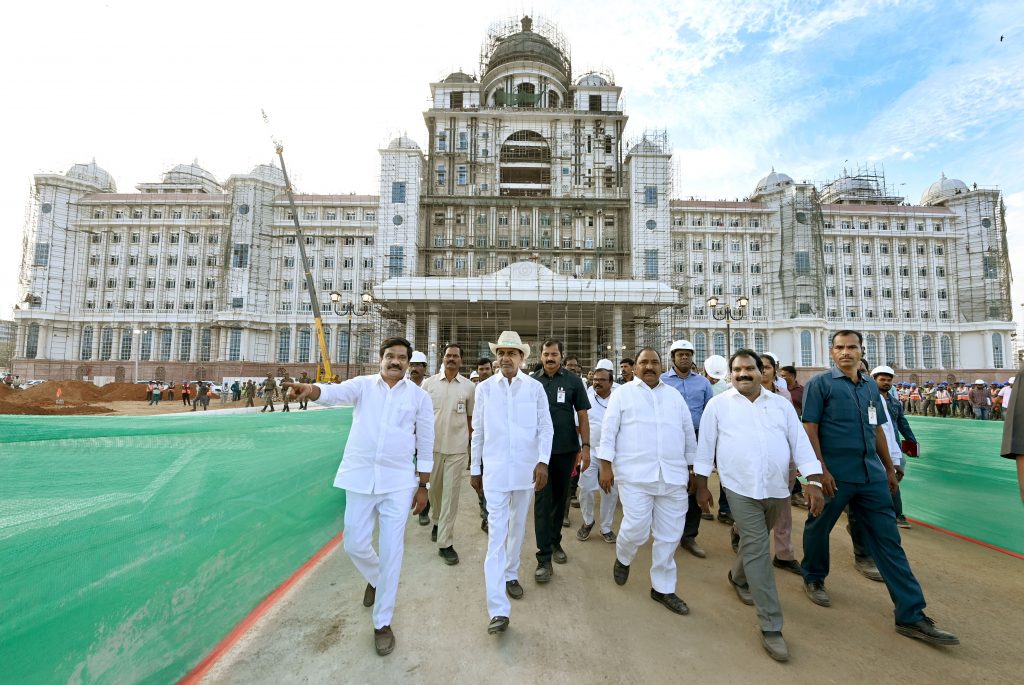 The new Dr. BR Ambedkar Telangana State Secretariat building is getting finished touches for inauguration in a few days. The New Secretariat building showcasing Telangana’s self esteem in a most glorious way that has never been seen in the history of the country, is located on the banks of Hussain Sagar lake which emerged as a landmark location with the famous Gnanabodhi Buddha statue. The new Secretariat building is also close to two more historical structures – 125 feet statue of the architect of Indian Constitution author Dr. BR Ambedkar and Martyrs memorial to remember the sacrifices of Telangana martyrs which are coming up alongside of the famous Hussain Sagar lake in Hyderabad.

Chief Minister Sri K. Chandrashekar Rao will inaugurate the new State Secretariat building, which is being constructed in tune with Chief Minister’s vision with the highest quality standards and green building concept providing a pleasant environment of natural air and light flow from all directions to discharge their duties by the secretariat employees, on February 17.

On this occasion, CM inspected the progress of the construction work of the secretariat building, which is taken up by the Telangana government in a very ambitious manner on Tuesday afternoon. The Chief Minister inspected the entire area starting from the front door of the Secretariat to four corners of the buildings where the final touches of the construction are under progress. During the review of the progress of the Secretariat work which lasted for more than two hours, CM made several suggestions to Minister Vemula Prashanth Reddy including engineers and the working agency.

On reaching the Secretariat on Tuesday afternoon, CM started the inspection through the main gate. The Chief minister moved forward by inspecting the construction of the compound wall, which has reached its final stage with the installation of the defense systems. The roads being constructed towards the main building are inspected. From there, CM walked directly in the south-west direction, where he visited the constructions undertaken for banks, canteens, ATMs, media center and waiting rooms for visitors. On this occasion, Minister Vemula Prashanth Reddy informed CM about the facilities and other details. The CM inspected the prayer hall which is under construction in the south-west direction for the Secretariat employees. After that, the Chief Minister inquired about the internal roads in the western direction and the quality of the cement used for the final constructions, etc. CM also inspected the construction of the building for the use of the Secretariat employees in the western part of the Secretariat. The facilities specially arranged by the state government for the disabled are examined. CM also visited the vehicle parking area.

From there, the Chief minister went straight through the main entrance of the secretariat and reached the first floor by climbing the stairs. The engineers are instructed about the elements to be installed on the right and left sides of the stairs. After reaching the first floor, CM reached the CM’s chamber on the 6th floor by lift. CM thoroughly inspected the false ceiling, wood paneling, AC fittings, finishing touches and made many suggestions. Later, the chief minister inspected the Chief Secretary’s chamber, the offices constructed for the government advisors including CMO secretaries, PROs and other CMO staff. CM suggested that changes should be made in the CM Chamber. The conference halls set up on the same floor and the false ceiling work carried out in them are inspected. CM inspected the Marble polishing and painting works which have reached the final stage in the corridors and suggested the works of art made with GRC as a part of the elevation, and final stage works should be done with quality and more creatively. The CM inspected the signal boosting system set up to provide a continuous internet facility in the Secretariat. From the sixth floor, CM had a glimpse of the construction of the new structures taken up along the shore of Hussain Sagar lake.

The Chief Minister inspected the interior designs, electrical work, fitting of ACs, artistic artwork on pillars, and painting work and made several suggestions to the representatives of the construction company. CM inspected the premium marble stoning works and wood works and expressed his satisfaction. CM inquired about the progress of granite flooring, marble flooring, false ceiling, GRC works and lifts.

The CM went down from the sixth floor by lift and reached the first floor. From there, he went down the stairs and inspected the specially arranged fountains on both sides of the main gate. The lawns, roads, parking, and gardening works being constructed in the north-east north-east direction are inspected. Examining the structure of all the structures through the map, CM inquired the work agencies and the minister about the work progress. From there, they moved on their feet, walking on stones and crossed the sticks and iron materials used for construction.