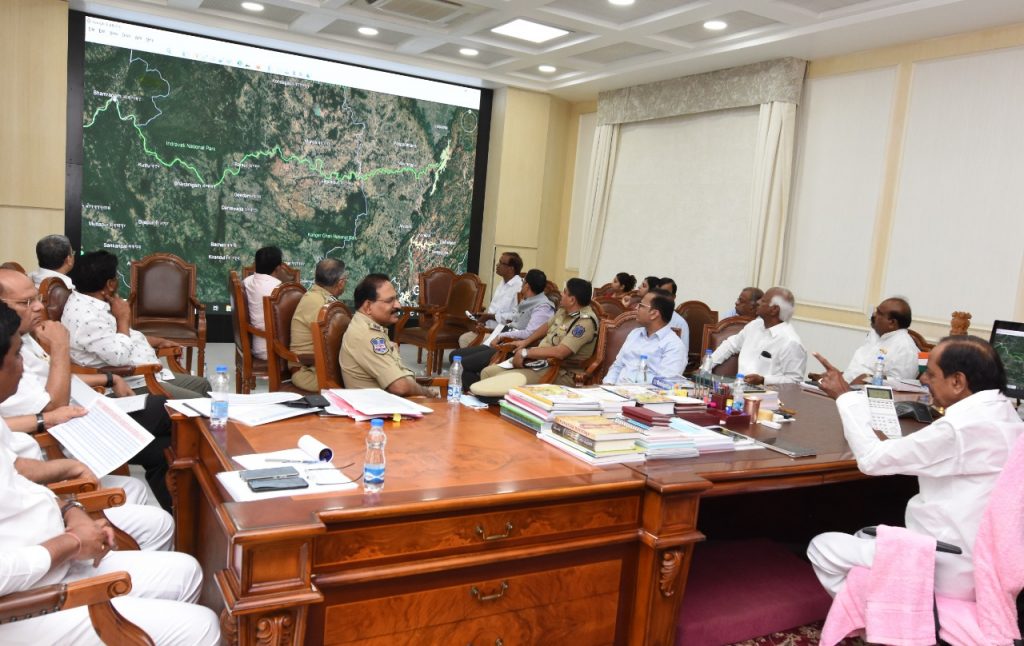 Chief Minister Sri K. Chandrashekar Rao has instructed the Irrigation officials to discharge water into SRSP and other reservoirs in the wake of heavy inflows in river Godavari due to incessant rains In Maharashtra and Upper Godavari catchment areas in the Telangana state.

Following the IMD warning that several parts of Telangana will receive heavy rains in next two or three days, CM directed the Ministers, MLAs, Collectors, all departments’ officials and staff to cancel their other activities and make available themselves to people. All of them have been asked to be on high alert.

CM held review meeting for over 12 hours and personally monitored the flood situation with ministers and higher officials.

Speaking in the high-level meeting, CM said that the Government machinery should be prepared to tackle any kind of situation. He called ministers and people representatives over phone and enquired about rains and flood situation in their respective areas. The CM also spoke to officials and ascertained the situation in the flood prone Districts. He assessed flood situation in Godavari, heavy inflows and flood waters in the tributaries. CM evaluated the flood information on the screen and made suggestions to the officials about precautions to be taken in flood affected areas.

The CM instructed Engineer-In-Chief to Irrigation Muralidhar to take adequate measures to contain submergence due to backwaters at the reservoirs which have been receiving heavy flood waters. As the IMD warned rains for another one week to 10 days, he appealed to people co-operate officials, maintain self-regulation and take precautions during the heavy rains. CM urged people not to venture out of their homes unless there is urgency.

The Chief Minister instructed Chief Secretary to make ready NDRF, Rescue teams and Chopper services for rescue operations in Godavari catchment area, GHMC and other Municipal areas. The officials explained Chief Minister about the relief operations taken to rescue people from flood affected places during two-day heavy rains in the state. The authorities informed CM that Nizamabad, Mulugu, Ramannagudem etc., are receiving heavy downpour and the situation is very much under control. The CM gave instructions to the officials concerned to take up required emergency measures. He reiterated that official machinery should be prepared to deal any eventuality.

River Godavari is in spate at Bhadrachalam as the tributaries – Pranahitha and Indravati are receiving heavy inflows. Following third flood warning issued in Bhadrachalam, the CM spoke to Minister P Ajay Kumar over phone and instructed the minister to stay in the town and monitor the situation closely. He enquired the minister about flood situation in Godavari.

CM made it clear that local people representatives, Collectors and officials should stay in their district headquarters and not to leave their places in the wake of Red Alert sounded in Warangal, Nalgonda, Suryapet, Tungaturthi, Mahbubabad, Jangaon etc. He instructed Minister G Jagadish Reddy to hold regular review meetings with Old Nalgonda district Collectors and SPs and take necessary measures. He asked Ministers Indrakaran Reddy and V Prashant Reddy to put entire administration on high alert in Adilabad and Nizamabad districts in the wake of floods in Godavari. He suggested Indrakaran Reddy to coordinate with Irrigation officials and ensure the discharge of excess flows from river Gaddennavagu and Swarnavagu by maintaining 70 per cent storage of water.