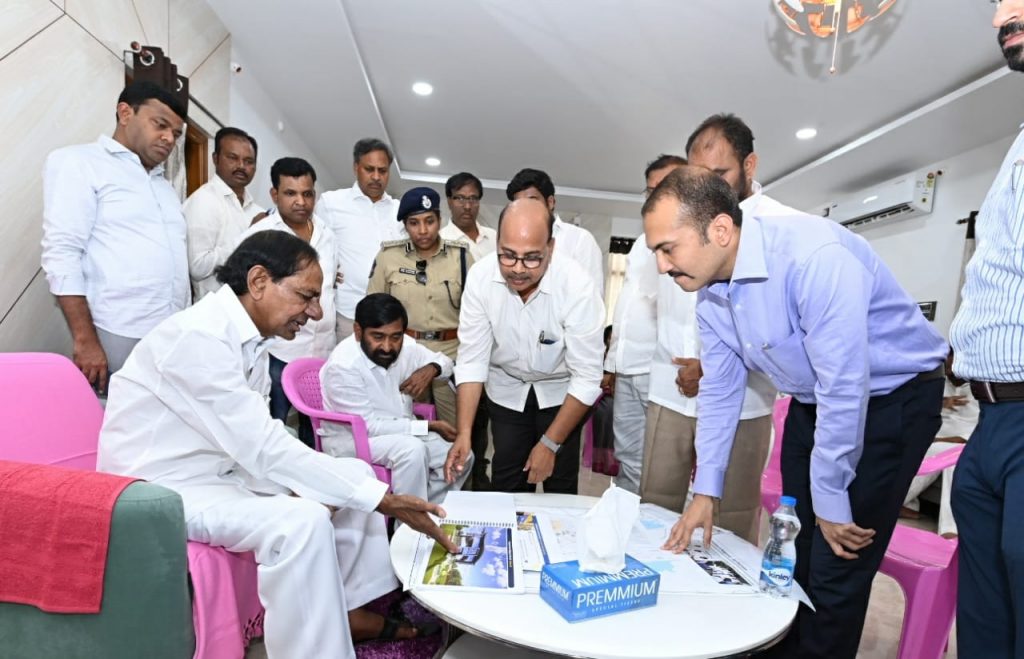 Chief Minister Sri K. Chandrashekar Rao Conducts review on Nalgonda Town Development. Chief Minister on Thursday instructed the officials concerned to expedite the development works taken up in Nalgonda Town. He expressed unhappiness over the delay in the works despite the government released adequate funds.

Soon after visiting Narketpally MLA Sri CH Lingaiah house and paid tributes to the MLA’s departed father, the CM conducted a review on the development programmes.

Progress in Development works in Nalgonda:
The CM inquired about the status of the progress in the works as ordered by him earlier. He wanted the development of Nalgonda Kalabharati Cultural Center with state-of-the-art facilities with pleasant facilities. The seating capacity of the centre will be 2000 people. The officials have been asked to take up the beatification of Panagallu Udaya Samudram Tank Bund with greenery. The recreation facility will provide people from the villages abutting Nalgonda town to come and enjoy with their family members and children during holidays.To make the tank bund as a beautiful structure, the CM suggested the officials to get designs from the eminent architects. CM also reviewed the work progress in the construction of Integrated Market through photos and reports submitted by the officials. Nalgonda Collector Sri Prashant Jeevan Patil, Municipal Commissioner Ramanachari and other officials briefed the CM on the progress of works. The CM asked the officials to develop a green park with protection and a children’s cage with a playground for children to play when they visits the market.

CM advised the officials to set up urban parks wherever possible in Nalgonda town. He inquired about greenery in the town and nurseries also. Collector Prashant Jeevan Patil explained the CM the steps taken for the beautification of the town which included planting of the saplings and translocation of large trees which have been removed due to road widening and other reasons.

The Chief Minister also inquired about the development of Nagarjuna Sagar with the officials. He sought the information about the development works and lift irrigation works undertaken in Alia and Nandikonda municipalities along with Sagar from local MLA Sri N Bhagath. The officials informed the CM that the tenders process for the works has already been completed.

CM said that funds were already released and instructed the officials to expedite the works without any delay. He sanctioned the construction of flyover at Nalgonda Marriguda bypass Junction, R&B Guest House at Clock Tower Junction in the town and R&B Office at the new Integrated Collectorate office.

CM called state R and B Minister Sri Vemula Prashant Reddy over phone and asked him to issue required GOs for the newly sanctioned construction works . He instructed the officials to complete works in a six months time. The CM also directed CMO Secretary Smt. Smita Sabharwal over phone to take steps for the construction of the office of the Chief Engineer of Irrigation. CM responded positively to the request made by Miryalaguda MLA Sri Bhaskar Rao for the construction of a court in Miryalaguda town.