Work hard to enhance the image of Hyderabad: CM 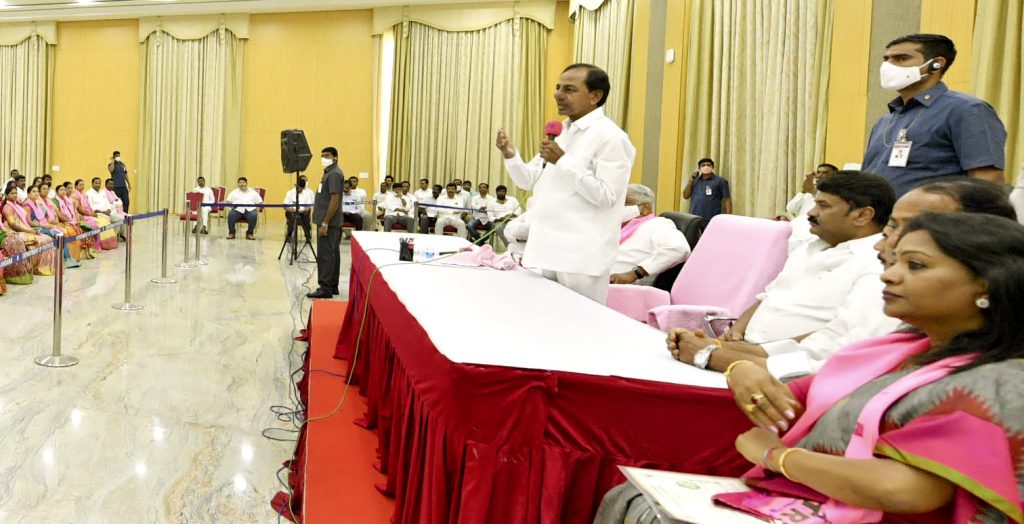 Chief Minister Sri K. Chandrashekar Rao has asked the newly elected Mayor, Deputy Mayor and Corporators to strive to enhance the image and greatness of Hyderabad, which is a truly global city where people from different regions, cultures come to live with and which is known as mini India. The newly elected Mayor Ms. Gadwal Vijaya Laxmi, Deputy Mayor Ms. Mothe Srilatha Reddy, Corporators met the CM in Pragathi Bhavan here on Thursday and thanked him. The CM congratulated them. The CM on this occasion gave them some pep talk.

“Among crores of the people, only a handful gets the chance to become public representatives. This is not a great one. But, what is more, important is, how to properly utilise the opportunity given by people as a public representative and earn a good name. These are the times where even if you are good, charges are leveled against you. If you give even a small chance, you will get a bad name. Hence, act with caution,” the CM told them.

“Those who are in power should act with patience, maintain composure and be simple. There should not be any change in the attire, language, or behaviour. If you indulge in the unnecessary and irrelevant talk there is no gain but you may land yourself up in trouble. Hence speak carefully. Don’t discriminate against people who come to you on the basis of their caste or religion. Comfort them and take care of them. Give them due respect. Listen to them patiently. Help them as much as possible. Don’t tell lies. Make a committed effort to solve the problems,” the CM advised them.

“Listen to Goreti Venkanna’s song, ‘Galli Chinnadi Garibolla Katha Peddadi (the street is narrow but the problem of poor is big).’ I have listened to it more than a hundred times. There are the difficulties, problems of people living in Bastis in the song. Understand them. Mayors and Corporators should visit the Bastis. Understand the plight of people there. Come to the rescue of the poor. This should be your main aim and objective,” the CM said.

“There are several advantages to the Hyderabad City. It has a wonderful future. This is a truly global city. There are many who came from other states and residing here. In the city, we have a Sindhi Colony. We have a Gujarati Galli. There is Parsi Gutta. We have Bengalis, Malayalees, Maharashtrians, Marwaris, and Kayasthas. We have a population comprising of people from various regions, religions and cultures. They all take pride in being Hyderabadies. Hyderabad is like Mini India. This is the city, which loves everyone. The future of this great city lies in the newly elected Corporators and Mayors. Work hard to enhance the image of the City. Take care of all sections of the people. The government also will launch programmes to develop Hyderabad. Support them and cooperate with them,” the CM said.

“There are so many Corporators, but only one Corporator will get a chance to become the Mayor. There are many who have the required qualifications to become Mayor. But we cannot give the opportunity to many. You will do the same thing even if you are in my position. Understand this and unitedly take this city forward,” the CM said.