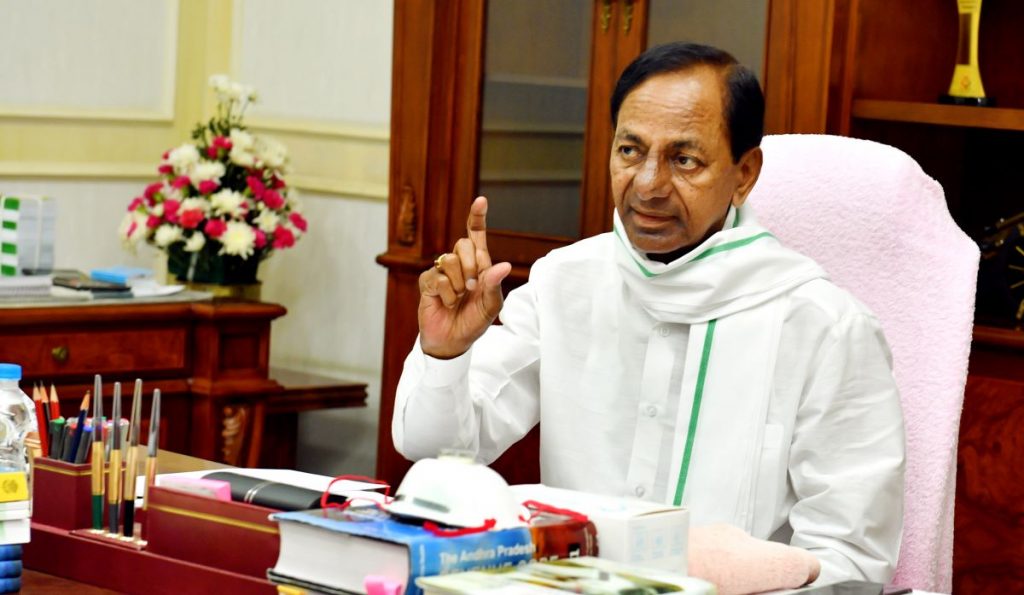 Chief Minister Sri K. Chandrashekar Rao has appreciated farmers in the State for agreeing to go in for the regulated cultivation as suggested by the government and for getting ready to sow the seeds accordingly. The CM said that the state government had proposed regulatory cultivation, wherein farmers would cultivate those crops, which have demand in the market, to make agriculture a profitable venture. For this, the CM said there is cent percent support from the farmers in the State. Since all the farmers in the state have agreed to go in for the regulatory cultivation, the CM had instructed the officials concerned to extend the Rythu Bandhu Scheme benefits to all the farming communities. He said that already the works on agriculture have begun and the farmers should not worry about the input money. The CM instructed that each and every farmer and for each every acre the Rythu Bandhu amount should be deposited in their Bank accounts in a week or ten days’ time. The CM while congratulating the entire farming community in the State for following the regulatory farming, urged them to utilize the money given under the Rythu Bandhu and step up their farming activity. The CM instructed the officials concerned to prepare a plan for the Rabi season Crops as they did it for the Monsoon season.

The CM reviewed the crop cultivation district-wise. He had examined all the reports sent by the Agriculture Officers from all the districts. It is found that in all the districts, crop cultivation is happening as per the instruction given by the government. The officials stated that based on the government’s instructions, already seeds were sown in 11 lakh acres. The farmers have also purchased seeds based on the suggestion given by the government on the crops to be cultivated. In accordance with the government’s advice, farmers in this monsoon season have put Paddy in 41, 76, 778 Acres, Red gram in 12,31,284 Acres, Soya bean in 4,68,216 Acres, Cotton in 60,16,079 acres, Corn in 1,53,565 Acres, Green Gram in 1,88,466 acres, Black Gram in 54, 121 Acres, Castor in 92,994 acres, Ground Nut in 41,667 Acres, Sugar Cane in 67, 438 and other crops in 54,353 Acres, the officials informed the CM.

“Farmers in the state are ready to start cultivation for the Monsoon crops. Give Rythu Bandhu scheme benefit to them without any delay. Though the state is facing a financial crisis due to Corona, yet it decided to extend the Rythu Bandhu scheme to farmers. The government policy under the scheme is to give Rs 10,000 per acre per year. Rs 5000 is given during the Monsoon and another Rs 5,000 in Rabi. To pay this Monsoon to the farmers Rs 5,000 per acre, Rs 7000 Crore are needed. The state government had already transferred Rs 5,500 Crore to the Agriculture department. The Finance department officials are instructed to release another Rs 1500 Crore within a week’s time. The work to deposit Rythu Bandhu Scheme money into farmers accounts will begin soon. The money will be deposited in the farmers’ bank accounts in ten to 12 days. This is proof of the government’s commitment to stand by the farmers,” the CM said.

The CM instructed the officials concerned to prepare a Crops plan for the Rabi crops, as the first step for the regulatory farming is successful in the monsoon season. He said besides advising the farmers on which crops they should cultivate during the Rabi, seeds for the crops suggested should be made available by the officials.

“In the last Rabi, crops were cultivated in 53.5 Lakhs. This Rabi season, due to the availability of water from the projects as well as the good rains, the crops cultivation may increase by another 10 to 12 Lakh acres. The Maize which was discouraged from cultivating during the Monsoon can be cultivated in Rabi. Paddy should be cultivated in 45 Lakh acres, Maize in 6 to 7 Lakh acres, Chickpeas in 4 Lakh acres, Ground Nut in 5 Lakh acres, vegetables in 1.5 Lakh acres and the plan should be made based on this. Make the availability of seeds accordingly. Suggest fine and coarse varieties of Paddy to farmers. Seeds for other crops are available in the market. The agriculture department should make arrangements for Ground Nut and Chickpea seeds. Regulatory Farming is this. Preparing the plan of cultivation and making arrangements in advance,” the CM said.

Multiple benefits by Regulatory farming
“Regulatory Farming policy is not meant for one crop or one season. The Regulatory Farming policy is made, with a foresight amidst the background of a revolution is taking place in the agriculture sector in Telangana State, keeping in view problems that may crop up in the future from selling Paddy and other issues, solutions for the issues with farmers’ welfare as the focus. With the background of no power crisis and all the projects are being completed, the Telangana state will transform itself as an Agriculture surplus state. This Rabi, the Food Corporation of India had 1.15 Cr tonnes of Paddy all over the country. Of this, 64 Lakh tonnes are from the Telangana State. This means the FCI procures 55 percent Paddy from our State alone. The FCI Chairman himself congratulated the State for this achievement. In the United Andhra Pradesh state, the then leaders made cheap comments like if the Telangana State was formed, there would be darkness, and farmers will be a major crisis. But the Telangana state has achieved wonderful progress in the agriculture sector and the increased output is a living example to this,” the CM said.

“In the days to come, Kaleshwaram, Sitarama, Palamuru Lift Irrigation projects will be completed and the Telangana State is progressing towards cultivating crops in 1.30 Crore acres. Amidst the possibility of paddy is being cultivated in leaps and bounds, the government has introduced the regulatory farming policy. This policy will be the first step for the Telangana state in it’s to march forward in the farming sector,” the CM said.

“In the past, the state of Punjab achieved remarkable development in the farm sector. It became number one in the country. But due to the non-implementation of the regulatory farming, it ended up in agriculture Disaster. The state government had examined the lessons learned from Punjab’s example and prepared regulatory farming policy in the State so that such problems will not recur,” the CM said.

In his context, the CM explained the multi-benefits of Regulatory farming:

The CM wanted farmers to be made aware of regulatory farming as well as the use of fertilizers. The lands are becoming deposits of Phosphate due to non-utilization of the quantity of the fertilizers used. In such a situation, Phosphate Solvable bacteria should be released into the lands to remove the Phosphate reserves to protect the soil’s strength. The government will bring such methods under the regulatory farming policy to the farmers. Under the Regulatory Farming Policy besides a change in crop pattern, use of fertilizers, bring to the market the produce in a regulatory manner, protecting the strength of the soil, Analysis on the market conditions, research will also be part of it,” the CM said.

“When the Telangana state is becoming a great agriculture based state, the institutions related to the farm sector should also be developed. Milling institutions should increase. Food processing should take place. Towards this the state government is planning to set up Food Processing Zones in a big way in the State,” the CM said.